On Monday 3 January 2011 having checked into Kasigau Corridor REDD+ Project headquarters in the morning, I and my team of eight Rangers, went out on an afternoon patrol through Rukinga Sanctuary. At 3.00pm we found some footprints of three people who we tracked off Rukinga and into a neighboring ranch.

As we followed their tracks in the sand we came across their lunch break camp which was very recent, and showed evidence of bush-meat having been eaten – a small team of poachers. The tracks kept getting fresher and clearer until an hour and half later we knew we where very close. At that time and knowing that the poachers would be armed I ordered our Wildlife Works Rangers team to pull back and I alerted Kenya Wildlife Services (KWS).

A team of three tough and very skilled Somali bush-men had been elephant poaching heavily in the area since September last year and had managed to elude quite an intensive air and ground operations between KWS and Wildlife Works Rangers since then. We all hoped that we had found them again. KWS Armed response unit, headed by Corporal Jele, were based at 6.0, our new Rangers post and they immediately came to us. Previous response times had been up to five hours. I gave KWS our best tracker Mohammed Bakula to show them to where the poachers where resting.

Within 10 minutes KWS had found them, and opened fire immediately. The Bushmen fled without returning fire, leaving behind crucial evidence. We reunited with KWS and went to where the poachers had run from. They had left six elephant tusks – four big ones from old kills, and two non matching pairs from much younger elephants which where three or four days old. This confirmed our fears that there had been more elephants slaughtered very recently and very close to us. By now it was nightfall. We made a plan for the following day for KWS to continue pursuing the Poachers and that Wildlife Works Rangers would backtrack their footprints in the hope that it would lead us to the elephant carcasses. 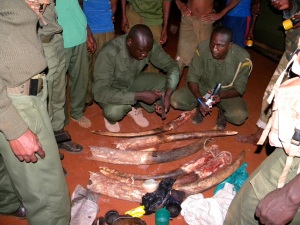 At daybreak having spent the night at Makaramba we split up. Our eight Rangers and I backtracked the poachers’ tracks, which where still very clear, to their camp in thick bush near a dam on Rukinga. It was evident from their tracks that they had spent considerable time there. Bones from animals, a discarded torch and many tracks around the dam where they had collected water confirmed that this was their base camp. They had used it for three to four days. 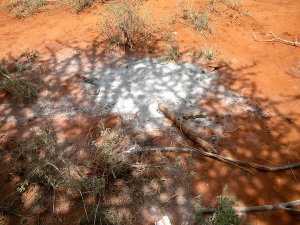 I decided to split the rangers up into three smaller teams, one going North, one going South and one going East from the Poachers Base Camp. This would I hoped find the elephant carcasses quickly. At 2.30 pm one team called in to say that they had come across a dead female elephant – we quickly came together and within 10 metres of the first carcass we found the other two butchered elephants.

One of the Slaughtered Elephants was not even four years old. The carcasses showed evidence of AK47 destruction: multiple bullet wounds to the heads.

12 Cartridges were found on the ground, confirming the type of weapon used in their slaughter.

The following day, KWS called into say that they had found another four freshly killed elephant tusks discarded on the poachers trail. This confirmed the three elephants killed, and gave us some conciliation to know that the poachers had not got away with any of the ivory. Their mission had not been successful.

Ivory poaching in the area has seen an incredible increase in the last six months. We will catch this team of poachers soon and put a stop to their slaughtering.